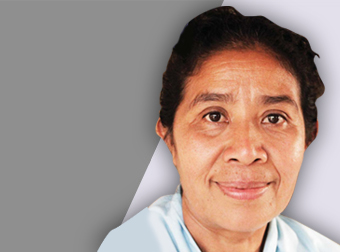 Sister Lourdes, known as ‘Mana Lou’, through her decades-long work has developed a solidarity network across Timor-Leste, focusing on support for the most vulnerable communities. While the country struggle for independence is over, Mana Lou sees her people still struggling against poverty.

Since 1989, Mana Lou has led the organisation ISMAIK, which serves the community both with urgent humanitarian assistance and with longer-term projects to fight poverty and revive and preserve East Timorese culture. In this role, Mana Lou has risked her life countless times traveling across the country to visit refugee camps, often in remote and dangerous areas. She visited the militia camps in West Timor to assist the refugees and to try and convince them to return to their villages. As leaders fled after massacres, she would continue through roadblocks to work with and for those left behind.

Her order now runs three orphanages in the community, and Sister Lourdes provides education and support programmes to enable the children to gain independence and become self-sufficient in the future. Mana Lou has also worked together with an American doctor, Dan Murphy; they set up a clinic for the local people, providing medical assistance for the disadvantaged members of the community. From 1999 to 2018, the clinic has averaged at 300 patients a day and is the busiest in the country.