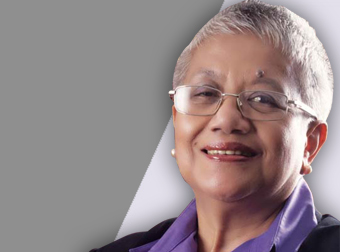 Teresita Quintos Deles, also known as Ging, has been at the forefront of peace initiatives in the Philippines, as a civil society activist for many years and, more recently, as a public servant. She was the first woman to be appointed as Presidential Adviser on the Peace Process, with Cabinet rank, serving a first term in 2003-2005 and a second term under the 2ndAquino government from July 2010 to June 2016. Under her watch the Comprehensive Agreement on the Bangsamoro (CAB) was signed in 2014, marking the end of four decades of armed conflict between the Philippine government and the Moro Islamic Liberation Front (MILF). Three other peace tables were brought to peaceful completion and a nation-wide peace-and-development program, specifically targeting conflict-affected areas, was successfully implemented.

She sat as an Expert-Member of the UN Committee on the Elimination of All Forms of Discrimination Against Women (UN CEDAW) in 1991-1994.  She served as the Philippine Permanent Representative in the Advisory Board of the ASEAN Institute for Peace and Reconciliation (AIPR) from its founding of 2013 to June 2016. Under her leadership, the Philippines became the first country in the Asia-Pacific to adopt and implement a National Action Plan (NAP) on UNSCR 1325 on Women, Peace, and Security (WPS).

After completing her second term in public office, she assumed the position of Senior Mediation Adviser, with a special focus on Gender and Inclusion, in the Standby Mediation Team under the UN Department of Public Affairs from February 2017 to January 2018.

She currently chairs the International Center on Innovation, Transformation and Excellence in Governance (INCITEGov), which she co-founded in 2006 and which today continues to catalyze, facilitate, and nurture reform-centered policy research and movements for the defense and strengthening of democratic governance. She co-founded and serves as chair-Convener of the women’s coalition EveryWoman, a leading hub in the broad citizens’ movement against misogyny, impunity, and creeping authoritarianism in the Philippines.