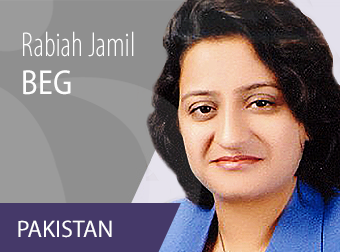 Rabiah Jamil Beg is a leading television journalist working as a correspondent and producer for the largest private television network of Pakistan, GEO. She is the only woman who accepted opportunities of reporting live from the conflict and crisis areas of Baluchistan, the Sindh province, Southern Punjab and the Khyber Pakhtunkhwa district of the Federally Administered Tribal Areas.

In tumultuous locations, Rabiah has covered insurgencies, brewing and active conflicts, and humanitarian crises. She has broken into a traditionally male-dominated space of reporting and has covered issues such as extortion, kidnapping, ransoms and the daily killings that occur in Karachi, becoming the first woman crime reporter on Pakistani television in the early 2000s. By covering the social issues that hamper the progress of women in a conservative society like Pakistan, she has been instrumental in bringing to the debate women’s perspective.

Rabiah featured in a documentary telling others about the ordeal of her fraudulent marriage. Rabiah stated “I have done this to help other parents save their girls from becoming a victim of a sham marriage like mine. It’s a social stigma which I have faced and got away with but many cannot.” Following the documentary, she recalled the scores of phone calls, emails and even face to face interactions from parents and girls thanking her for courage and awareness building activities.

Since then, Rabiah has produced Human Security Reports for South Punjab and has carried out field-based surveys, opinion polls, and analytical research on gender, media, and peacebuilding for organisations in Pakistan.