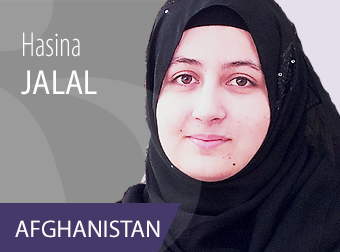 Hasina Jalal is a promoter of women’s rights, democratic principles, journalist, writer, and lecturer from Afghanistan. With a focus on education and training for marginalised women in her community, Hasina has advocated for, and encouraged, the voices of young women to promote partnerships and collaboration with women’s groups and individuals. Despite cultural barriers and receiving security threats, Hasina has pushed the agenda of women’s rights in Afghanistan through capacity building with numerous national NGOs.

Additionally, Hasina is a writer and publisher in Afghanistan local press, and through this platform has been able to provide narratives and insights into the lives and struggles of women in local communities. She also co-founded the Afghani weekly Freedom Message Newspaper, an activist tabloid that exposes abuses of women’s rights and promotes freedom of expression, tolerance, and understanding of democratic principles and laws on human rights. Moreover, she holds an MBA from the American University of Afghanistan.

In 2012, Hasina was listed by the Asian Rural Women Coalitions (ARWC) under the Honouring 100 Women Campaign. In the same year, Hasina founded and directed the National Association of Afghanistan Civil Society, and founded the South Asian Female Alliance. She was also the founding member, trainer, and advocate for the Afghanistan Women Empowerment and Capacity Building Centre from 2011. As well as this, she received the Women Leadership Achievement Award by World Women Leadership Congress in 2015, and the World Super Achiever Award by the World Human Rights Congress in 2017. Between 2016 and 2017, Hasina was a college lecturer at both Khorshid University and Saber University, as well as a Policy Analyst at the Presidential Palace. Since 2014 she has been on the board for at Justice for All Organisation, where she continues today.

Currently, she works as Policy and Aid Effectiveness Advisor to the Minister of Mines and Petroleum of Government of the Islamic Republic of Afghanistan, other than being the Acting Director of Jalal Foundation. Lastly, in January 2019, Hasina co-founded the South Asian Women’s Coalition for Cooperation.