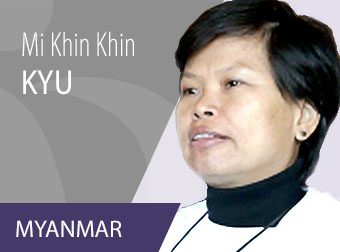 Mi Kun Chan Non is a women’s advocate and Chair of women’s organisations from southeast Myanmar, where she has been vocal about women’s participation in the peace processes for over a decade.

Following the ceasefire agreement between the Burmese government and the ethnic Karen rebels in 2012, Mi Kun saw an opportunity for progression and change for women’s rights. She has delivered leadership training and education sessions at the Thai-Burma border to marginalised Mon women in the local communities. Her training is based on encouraging women to challenge traditional norms and be empowered to take leadership roles in government and have a say in political and economic issues that affect them.

Mi Kun is the current Director and Vice-Chair of the Mon Women’s Organisation, a role she has held since 1999. Since 2016, she has also been the Chair for the Alliance for Gender Inclusion in the Peace Process. Mi Kun has acted as an Advisor and Donor Relationship Advisor for the Mon National Education Committee.