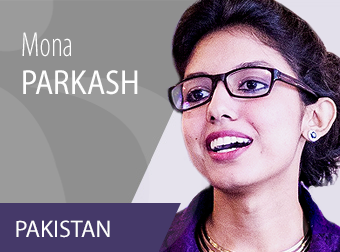 After completing her bachelor’s degree at Zubaida College in Hyderabad, Mona Parkash recognised the inequalities in educational opportunities available for Pakistani children and was compelled to take action. In the remote village of Taluka Jhando Mari in the Tando Allahyar province, there was neither a school nor an educational facility for children, and that pushed her to open a school.

After initial opposition from the community, a mainly agrarian one where parents were dependent on their children’s labour, she persevered and was ultimately successful in opening up her school. Today, Mona’s school has over 75 local children enrolled. The facility offers its students an egalitarian education rather than the typical gender-segregated schools offered throughout much of Pakistan.

As well as this, Mona has returned to school herself and is currently pursuing a Master’s degree in International Relations from the Sindh University in Jamshoro. She has also participated in a range of leadership development programmes and internships, such as the United States State Department, Concern Worldwide, the Centre for Peace and Civil Society, Freedom Gate Pakistan, and the Fredrich Naumann Stiftung.

Mona is also the Vice President of the Future Youth Group Hyderabad, which promotes peace and tolerance in Pakistani society. She was awarded the Meritorious Award for Outstanding Achievement from the Ministry of Youth Affairs and Habib University, as well as receiving the Commonwealth Youth Award for Excellence in 2016.