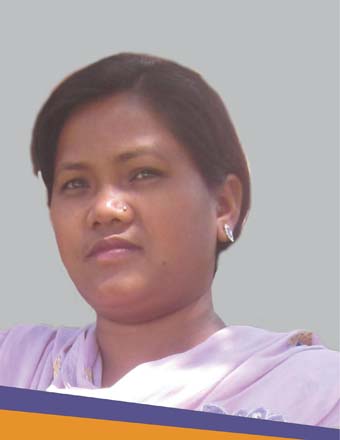 Kaushila Chaudhary was born into a Kamaiya family in the western district of Nepal, where her parents served as bonded workers for years prior to her birth and she herself was subjected to a variety of forced labour tasks for hours every day, often without food.

Despite being exploited and discriminated throughout her life, Kaushila committed herself to be a powerful voice for those who were Kamaiya, or ex-Kamaiya, and at the age of 15, she was finally freed. She used her freedom to participate in the Cehlibeti class run by LWF Nepal and also joined an adult literacy class. After receiving vocational training and completing her courses, she founded a weaving business, the profits of which allowed the family to pay off their debts.

Kaushila then became the Kalika Women’s Group secretary, and the Andolan Parichalan Samittee handed over to her the responsibility of settling ex-Kamaiyas into residential camps. Kaushila put herself in frequent danger as she guarded the camp at night, as forest officials would often set the camp on fire and attack the staff and the camp’s residents.

Even though the Kamaiya system was formally abolished in 2002, many were still privately enslaved. Kaushila continued her commitment by declaring that her town of Kailail was to be totally free of all kinds of slavery and that once the ex-Kamaiya were successfully rehabilitated, she would work towards ending violence against vulnerable ex-Kamaiya women.

Now Kaushila is the district committee assistant secretary, an indigenous people’s federation member, and a member of a commission set up by the Nepalese government to confront the discrimination inflicted upon ex-Kamaiya.