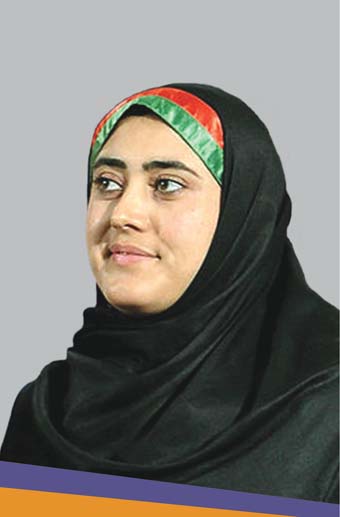 Maryam Durani has been for years a leader, role model, and advocate for women in Kandahar, Afghanistan. After earning a degree in Business from the American University of Afghanistan and studying Law and Political Science at Payame Noor University, Iran, she was elected as a Kandahar Provincial Council Member at the age of 21, not letting her age curb her determination to ensure a better future for her community. She served for a second term in 2009 as one of only four women on the Council and has brought women’s concerns and a woman’s perspective to the activities and discussions of the Council.

In the following years, she has covered a multitude of different positions, such as the director of Khadijatul Kubra – the Cultural and Social Association, and is also the founder of the Kandahar women’s advocacy network, the first Institute of Modern Study for girls in Kandahar, and Malalai Maiwandi, the first women’s internet café in Afghanistan, among many other initiatives. From 2010, Maryam also manages Merman Radio, the first women’s radio station in Kandahar City, focused on women’s issues and in bringing their voices to the forefront.

In 2012, Maryam won the World Ten Brave Women’s award and the Brave Woman Award from the State of Pennsylvania and was listed on TIME Magazine’s The World’s 100 Most Influential People: 2012. Maryam was also awarded the Women’s Rights Protector’s Award from Washington, Iraq, and Afghanistan Female Peace Activists’ appreciation letter from Turkey.