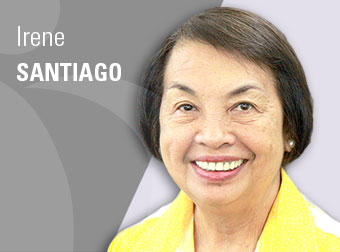 Irene Morada Santiago has enjoyed a spectacular career spanning over 40 years in peacemaking and peacebuilding in her own country, the Philippines, as well as internationally. She has been a negotiator, implementer, teacher and trainer, organizer, and thought leader.

She has the distinction of being the only woman in the world today who has been both a member of a peace negotiating panel and chair of the body implementing a major peace agreement. She was a member of the Philippine Government peace panel negotiating with the Moro Islamic Liberation Front from 2001-2004 and was the first chair of the panel implementing the Comprehensive Bangsamoro Peace Agreement.

Ms. Santiago is well-known internationally as the executive director of the historical NGO Forum on Women in China in 1995. As a parallel event to the UN Fourth World Conference on Women, the Forum was attended by 30,000 participants. It is considered the largest international conference on women in history. Prior to that, Ms. Santiago was the chief of the Asia/Pacific section of the UN Development Fund for Women (UNIFEM) in New York.

As an NGO leader, she co-founded the Mindanao Commission on Women, an NGO composed of Moro, Christian, and indigenous women leaders. She also founded the Mothers for Peace Movement and Women’s Peace Tables Worldwide to advance the significant role of women in women, peace, and security.

Currently, she is the Peace Adviser to the Mayor of Davao City, providing advice on the strategic direction of the local peacebuilding process called “Peace 911”. In 2018, she was named one of the two Main Rapporteurs of the 18th Asia-Europe Meeting (ASEM) on Human Rights and Preventing Violent Extremism. She is a member of the board of the Boston-based CDA Collaborative, the action research and advisory organization famous for developing the “Do No Harm” framework. She is also the lead convener of the global campaign on women, peace, and security called #WomenSeriously. Ms. Santiago has been a senior member of the faculty of the Rotary Peace Fellows Program at Chulalongkorn University in Bangkok since 2006.