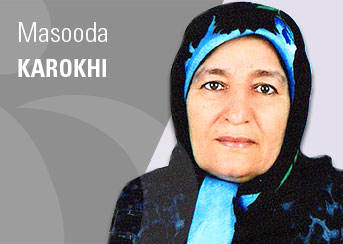 Masuada Karokhi has been an unwavering activist for women’s rights in Afghanistan for decades, working even during periods of Mujahideen and Taliban rule.

Despite receiving frequent threats from the Mujahideen, she continued her work for women. After the Taliban took power and banned education for girls, she started study classes for disadvantaged and marginalised women and girls, which were done privately without the government knowing.

In the space created after the ousting of the Taliban, Karokhi was able to work freely as an educator, while she continued to raise awareness about the promotion and protection of women’s rights.

She was chosen to head the consultative board of the services forum (fourth district) of the Herat province. In 2002, on behalf of the services forum, she attended a consultative meeting held by the Ministry of Women’s Affairs. In 2003, she represented the women of Herat at the loya jirga (Grand Assembly) to discuss the Constitution; she was also Herat’s delegate for civil society at the loya jirga on issues of peacemaking and peacebuilding. Karokhi ran for the 2005 and 2010 National Assembly election and was elected as MP for Herat in 2010.