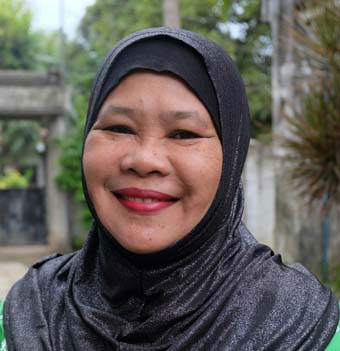 As a Muslim in the conflict-ridden Mindanao region of the Philippines, Mariam faced religious discrimination throughout her youth. For years, the Philippines has struggled with tensions and violence between the Muslim community, who strive for independence from the government, and the Christian majority. After earning her degree in civil engineering, Mariam was denied multiple job opportunities due to being a Muslim in Christian-dominated institutions.

Thus, in 2004 Mariam left her full-time job in banking to set up an organisation to help young Muslim graduates facing discrimination due to their religious beliefs.  As she explains: “I witnessed young Muslim graduates languishing in disappointment, unable to find jobs that matched their qualifications due to discrimination. Their experiences were very similar to mine. I wanted to help them. I set up Kapamagogopa Inc. (KI) with another colleague of mine.”

Mariam remains the Executive Director of KI and is a board member for other organisations working towards similar goals in Mindanao. KI won the Intercultural Innovation Award and the Tomorrow’s Peacebuilders Prize in 2013.