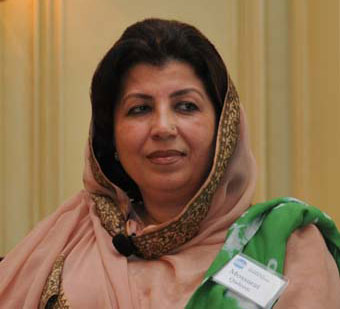 Mossarat Qadeem is a Political Science professor at the University of Peshawar. After an increased bout of violence carried out by extremists in her region of Pakistan in 2008, she became driven to become a full-time peace activist. Mossarat used her knowledge of the Qur’an and Sunnah law to develop the PAIMAN Trust, a non-profit organization, whose “Let’s live in Peace” programme aims at raising awareness and educating communities on the effects of violent extremism.

Through becoming aware of the impact on mothers whose sons had been radicalised and exploited by extremists, Mossarat developed TOLANAS: a programme which seeks to build women’s confidence in discussing issues with their children and develop critical negotiation skills to aid wider peace-building. As Mossarat stated, “Initially mothers would pretend not to know anything about their sons’ involvement in extremist activities, but with our skills-building work, and getting them to understand that the Qur’an prohibits homicide and suicide, they opened up and joined our activities to stop the youth’s involvement in violent activities”.

Mossarat is now a founding member of the Women’s Alliance for Security Leadership (WASL), and has founded Amn-O-Nisa, an alliance of women leaders from Pakistan, Afghanistan and India seeking to promote peace in their respective regions, and is a member of the International Review Panel of Global Community and Resilience Fund (GCERF). Mossarat was also Minister of information in the Khyber Pukhtunkhwa Province and a fellow at the Harvard Kennedy School of Government. Mossarat is currently a member of the FATA Reform Commission and has published two books on peace education.