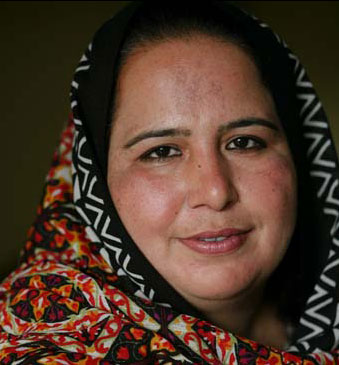 Rizwana Shah is from one of the most conservative areas of Pakistan. Her parents got her married once she completed the 12th grade, and she was quickly forced to find a job to support the family income.

Rizwana set up a sewing business with a micro-credit loan and was able to expand her business activities. Her improved economic circumstances motivated to Rizwana to help other poor, traditionally home-bound women in her region.

“Women in our society are seen as a source of burden instead of peace,” Rizwana argues. “Men assume the most power-ful positions in their households and are the sole decision-makers. with their skewed financial power, men believe they have a right to abuse women.”

In the wake of this reflection, Rizwana advocates for peace as a source of inclusion: “We need a form of peace that necessitates equality between all gen- ders, castes, age groups, religious groups and political groups, and the threshold to accept inherent differences. For such a peace to exist, Pakistan —and the whole world— would have to go through a cultural revolution and transformation.”