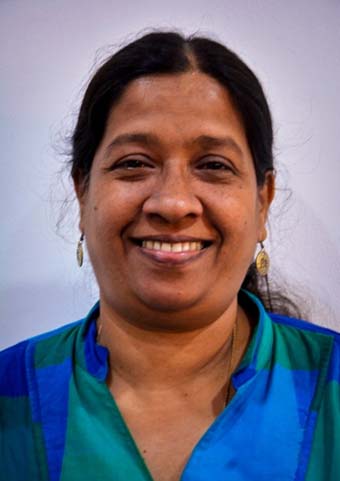 Sumika is a social activist with a focus on gender, women’s rights, and democracy in Sri Lanka. Coming from a poor, large family, Sumika witnessed first-hand the rich-poor gap among her classmates and began to write poems about it, publishing them in newspapers and magazines.

When Sumika left school, she was faced directly with political violence, and consequently took part in protest rallies in support of farmers, students, and marginalised groups in their pursuit of rights and entitlements.

After editing a journal called Dharaniin collaboration with the Women and Media Collective, in 2005 she set up the Women’s Resource Centre, an organisation that works with women heads of households in Kurunegala, who are typically from military families or small-scale farming families. These are the people, Sumika says, who are the most objectified by society, as they face violence, live alone, and have little knowledge of their economic, social, and cultural rights. The Women’s Resource Centre supports these households and empowers these women to embrace their rights and face the subjugation entrenched in the society they live in. Additionally, Sumika was the project coordinator of the Coalition for Assisting Tsunami Affected Women.

Sumika has since acted as the chairperson of the Sri Lanka Human Rights Commission’s Wayamba locality, has been awarded two scholarships from the Australian Government, and has worked with other women’s groups across Sri Lanka. Moreover, she is on an advisory board for the Suriya Women’s Development Society. Currently, she is a board member of the Rights Now Collectives and a visiting lecturer at Sri Lanka Open University, where she teaches Social Harmony.