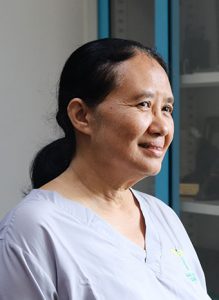 A multi-award winning activist and famous medical doctor in Myanmar, Cynthia Maung focuses on women and peacebuilding through healthcare.  She briefly joined the pro-domocracy movement in 1988.Her attempts to make a positive impact in her village were however cut short and she became a refugee on the Myanmar/Thailand border that same year. Despite this, Cynthia began offering medical services to fellow refugees as well as people from neighbouring villages. She became well recognized for her commitment to providing healthcare to Myanmar refugees, migrants and orphans without cultural, ethnic or religious discrimination. She started out establishinga makeshift clinic with minimal support, and today runs the Mae Tao Clinic that has networks with Thai health system. This clinic has a caseload exceeding 115,000 annually and with a client number of over 75,000 per year.

In conflict situations, women face exacerbated impediments to accessing health services – particularly maternal health services.   To address this challenge, Cynthia developed a system of providing emergency healthcare for pregnant women, in and around Mae Sot. The former Nobel-Prize Nominee has been training women on delivering high standards of health care, and has used her influence in the region to lobby governments and international civil society to leverage networks of emergency health services.