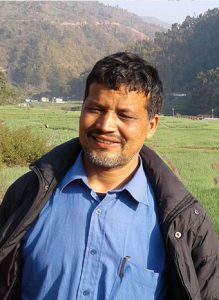 Growing up in a poor community in Nepal, Hira Singh Thapa was very aware of the differences in rights that men and women received. He witnessed domestic abuse against women, and noticed the disappointment families would display when their newborn child was a girl instead of a boy. It was these experiences that prompted Hira to become a champion of women’s rights in the Dailekh community and to communicate that Nepali men also have a responsibility to help change gendered attitudes.

Hira is the Founder of Social Service Centre Nepal (SoSEC), an organization dedicated to improving access to social, cultural and economic rights of marginalized Daliekh community members. Through SoSEC, Hira has developed initiatives to end child marriage in his community as well as the traditional practice of ‘chauupadi’ which isolates menstruating women from their homes. Hira’s initiatives have involved the creation of awareness campaigns which educate male leaders on the dangers of child marriage and chauupadi, a helpline which supports survivors through counselling services, and education campaigns in schools.