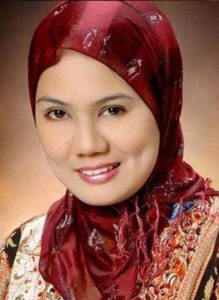 Samira Gutoc-Tomawis is an advocate for the people of Marawi, an area of the Philippines that has been a regular site of conflict and violence. Samira has held many different positions in government and has used her influence to advocate for the rights of women and members of marginalized groups. Samira wasa member of the expanded Bangsamoro Transition Commission (BTC), a government committee tasked with drafting the terms of Bangsamoro autonomy following the 2014 peace agreement.

In addition to her position on the BTC, Samira has acted as an advocate for women’s rights in post-conflict Philippines through academic and civil society related roles. She has served on the regional legislative assembly for the ARMM Government and is also a member of a civil society multi-sectoral advisory council. Samira was the Mindanao coordinator of the Young Moro Professionals Network (YMPN) and is a convenor of the Philippine Center for Islam and Democracy. She has lectured on Muslim leadership for entities such as the Civil Service Commission (CSC), the Philippine Army, and the Ateneo-supported Young Muslim Network program. These efforts have earned Samira recognition as one of the 500 Most Influential Muslims by Georgetown University’s Center for Muslim, Christian Understanding.