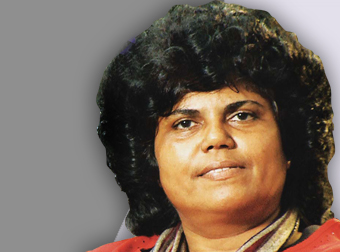 Rupika started her career as a volunteer with the Sarvodaya Organisation in Sri Lanka in 1987. Following this experience, she wanted to seek out a way of providing women who have been affected by conflict support and empowerment programmes.

Rupika then founded Saviya, an NGO focused on supporting the rights of women and children in local communities, promoting a peace based approach of development for southern provinces and other conflict-affected areas of Sri Lanka.

In 2002, she implemented an innovative program to promote women’s voices, which involved an exchange programme between the Sinhala women in the north and Tamil women in the south of the country. Under this initiative, over 100 women of each group had the opportunity to interact in workshops, social and cultural events together, helping build stronger relations between the two groups.

When the Tsunami of 2004 struck, Rupika supported women in the affected coastal communities, who she knew would be most vulnerable and those with the least support. At the same time, she organised rehabilitation programmes for the communities and despite facing resistance to her work, was determined to continue living there for over two months, leading community mobilisation efforts and organising camping sites to provide shelter and protection to those in need.

Rupika has been able to strengthen the economic independence of low-income groups and in particular, has been successful in her initiatives aimed at strengthening women’s entrepreneurship skills.