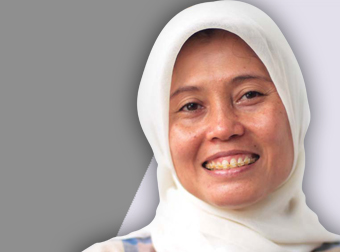 As co-founder of the Flower Aceh, an NGO set up to champion the rights of Acehnese women, in 1989, Suraiya has advocated on behalf of, and empowered, Acehnese women throughout the conflict and in the recovery period.

She has worked to empower women by ensuring their safety and advising them on issues of economic and reproductive rights. Through her organisation, she also collected and recorded data on violence against women and offered support services for victims of sexual violence. Since the 2004 Tsunami, Suraiya’s organisation has been running a Women’s Crisis Centre in partnership with other local women’s groups to empower women socially, politically and economically.

Suraiya is also a board member of numerous organisations, including Women Volunteers for Humanity (RPuK), Group for Aceh Gender Transformation in Aceh (KKTGA), the Institute for Policy Research and Advocacy and the National Supervisory Board of Women Solidarity Association.

In 2000, she was elected as chairperson of the steering committee for the Aceh Women’s Congress and has played an active role in providing a strong gendered analysis on the draft Bill on overcoming Social Conflict. This has been critical in ensuring that the Social Conflict Bill is in line with the principles enshrined in the UN Security Council Resolution 1325 on Women, Peace, and Security. Her contributions towards defending human rights and empowering women led her to be being recognised with the Yap Thiam Hien Award in 2001.

In 2009, Suraiya became a Gender Analysis Consultant for the Ministry of Women’s Empowerment and Child Protection, in order to provide input on the principles of justice, gender mainstreaming and the concept of UNSCR 1325 on the draft Law on Social Conflict.