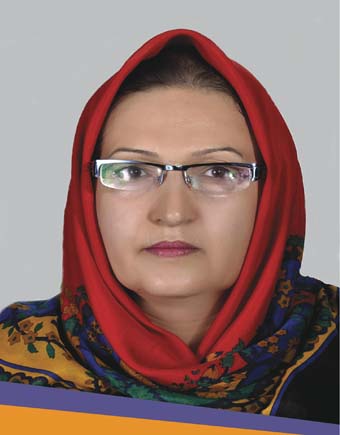 Hassina Neekzad is a political and human rights activist for women and children’s rights in the Herat province, Afghanistan. After earning an undergraduate degree in English Literature and Language, Hassina went on to complete two Master’s degrees in Linguistics. Following this, she returned to Herat as a professor at Herat University, where she taught for two years.

For over 11 years, Hassina was the Provincial Director at the Afghan Women’s Network, where she has campaigned on behalf of Afghan women. In this role, Hassina has taught English to service users, promoted civil advocacy activities, expanded cooperation with women of Western provinces, and involved women in the peace process through capacity building.

In January 2016 the Afghan Women’s Organization for Equality (AWOE) was established in Herat, and Hassina resigned from Afghan Women’s Network in order to start working with men networks. AWOE identifies and addresses the root causes of conflict and violence against women in Afghanistan by building a culture of peace as opposed to violence, particularly through the positive engagement of young men and villages elders. Since 2016 AWOE got 4 projects through ICAN (International Civil Action Network): even though they are not big projects, the changes they brought are considerable. Currently, AWOE has 8 networks of men in 6 provincial districts of Herat: by training and awakening men to the respect and promotion of gender quality, AWOE aims to bring positive changes in Afghan families, society, and ultimately in the country

Hassina has trained over 30,000 women through her involvement with AWN first and AWOE now and has tirelessly advocated for freedom, peace, and gender equality, and for the eradication of violence against women in her province.