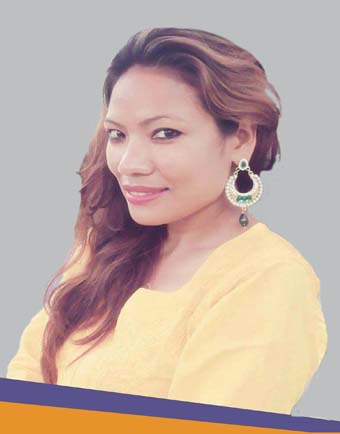 Sharmila Thalpa is a feminist advocate from Nepal. As a young woman, Sharmila had a child, but following the breakdown of her marriage due to domestic violence she struggled to achieve the maternal transfer of citizenship for her and her child.

After being unable to attain legal help and support for her son, she was forced to return to her family, where she experienced inter-family violence due to the stigma surrounding unmarried mothers. Even though Nepal itself has committed to addressing gender discrimination, due to lack of resources and support, as found out by Sharmila, gender-based marginalisation is still rife in practice,

In 2011, Sharmila decided to set up the Samida Women’s Development Forum, a non-profit organisation that aids single women and mothers to become informed of their rights, and empowered and supported economically, politically and socially. She advocates for further developments to take place in-government with legislative changes for those experiencing violence, poverty and limited education. Now the organization provides scholarships to 86 children of single mothers and carries out counseling and advocacy campaigns for the rights of single mothers. Through her work, she was able to encourage women to speak up about domestic violence while at the same time providing them with a support network and system.

Previously, Sharmila was the Senior Advisor at Aastha Foundation. Sharmila continues as the Founder and President of SWDF and has been the Goodwill Ambassador at the World Health Innovation Summit since 2017.