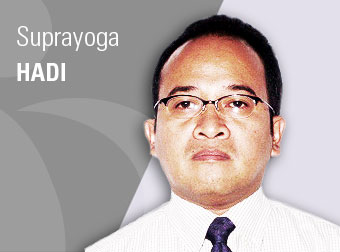 Suprayoga Hadi has been working towards the advancement of the inclusion of women in peace and security issues in Indonesia for over a decade. His view is that involving women in peace processes is vitally important to the success of peace talks. Suprayoga also advocates for women holding strong roles in the planning and implementation of security issues.

During a decade of tenure at the Ministry for National Development Planning, he played a leading role in establishing the Women and Peace Champion Forum in conflict-affected regions – including Maluku, North Maluku and Central Sulawesi – which aims to address domestic violence and issues women face in post-conflict areas, develop women’s capacities and promote women’s political participation.

Previously, he worked on the reintegration and recovery assistance program to reduce the vulnerability of victims of conflict in Aceh, directing focus to women and marginalised groups. From 2014 to 2015, Suprayoga was the Deputy Minister for resources development, and since 2015 has been the Director-General for the disadvantaged region and transmigration in the Republic of Indonesia. In this role, he is responsible for executing the policy for development, with a focus on disaster-prone regions as well as communities at risk of food insecurity and the post-conflict regions in Indonesia.

As the Director-General for the disadvantaged region at the ministry of village, disadvantaged region and transmigration in 2015-2017, he had been launching several official publications of the ministry related to conflict management, in particular the index of conflict resilience in Indonesia, the strengthening of village custom institution for community conflict resolution, and the guide book for post-conflict need assessment.

Since he has returned to the Ministry of National Development Planning/Bappenas in 2017, as the primary planner at the deputy for regional development, he has been working on the post-disaster nationwide as well as post-conflict region in Papua, and actively working as an advisor to the Team of Development Acceleration of the Papua region under the presidential instruction 9 year 2017.