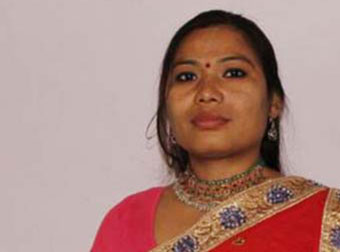 Basanti Chaudhary was born into a family of Kamaiyas, Nepali bonded-labourers, and learned from a young age that despite bonded labour being banned in Nepal since 2006, its legacies are deeply entrenched in Nepalese society. Basanti’s education was disrupted after she was handed over to a landlord by her parents when she was 5 years old; being exposed to this from such a young age shaped her outlook on the issue of bonded labour in her country.

After studying human rights on the Empowerment Education Programme for Kamaiyas, she decided to champion the rights of Kamaiyas. Following this, she became the Chair of the Kamaiya Pratha Unmulan Samaj (KAPUS), an organisation made up of former Kamaiyas, for Kamaiyas. Under Basanti’s leadership, KAPUS has assisted over 200 violence-affected women to improve their economic and social circumstances, raising awareness of their rights, and providing them with the tools for empowerment. The organisation is made up of 3,400 members, working for 2,900 households of freed Kamaiyas.

Today, Basanti is still the Chair of KAPUS, and believes that there is yet more to be done to ensure that women are closely involved in Nepal’s development and sustained peace, and works towards bringing these issues to the public domain.