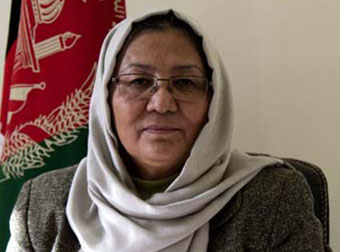 Habiba Sarabi is a politician, hematologist, environmental activist, and campaigner from Afghanistan. After studying medicine at university, Habiba was given a fellowship by the World Health Organisation and then moved to India. However, in 1996 Habiba fled to Pakistan with her husband and children during the height of the violence in Afghanistan. It was there that the passion for girls’ education and women’s rights pushed her to conduct classes for teachers in refugee camps. In 1998, she joined the Afghan Institute of Learning.

Following her return to Afghanistan in 2005, Habiba was appointed as the Governor of Bamyan Province and became the first Afghan woman to become a governor in the country.  In this position, she worked tirelessly and fearlessly to bring peace to Afghanistan and to enhance and enrich civil and political rights for women and girls following Taliban rule. Habiba has also held the position of Afghanistan’s Minister of Women’s Affairs and Minister of Culture and Education, the Vice President of Humanitarian Assistance for the Women and Children of Afghanistan and is currently the Deputy Chair of the Afghanistan High Peace Council, as well as being Senior Advisor to the Afghan CEO on Women and Young Affairs.

In 2013, Habiba was included on the TIME Magazine list of Heroes of the Environment, following her work to rebuild Afghanistan’s war-scarred landscape and her establishment of the country’s first national park. In March 2018, Habiba delivered a statement to the UN Security Council on International Women’s Day during the Open Debate on the United Nations Mission in Afghanistan.