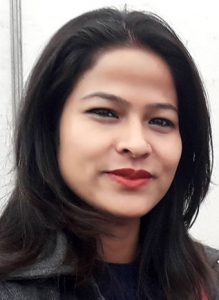 As the publisher and chief editor of the local media outlets Hamro Seti Weekly, the Morning Bell, and the Mahilakhabar, Logshari Kunwar has successfully brought attention to issues commonly faced by women in the region.

Post conflict, women remain vulnerable to gender-based violence. Logshari is one of the few women journalists active in the Kailali district of Nepal who covers issues on gender based violence, and women’s rights. Despite facing discrimination at the work place, hate crime, and physical violence for her work, she has persisted in using her voice to uncover women’s stories of injustice.

Her contributions were recognized by the Ministry of Women, Children and Social Welfare when she received the ‘2009 Women Empowerment Award’. She also won the ‘2010 Women Empowerment Awards’ from the Press Council Nepal and the ‘2010 Women Activist/Pacifist Sankalpa Award’ from the Sankalpa Nepal organization in recognition for her work as a grassroots leader.  Despite ongoing threats to her safety, Logshari is harnessing the power of journalism for women’s rights.