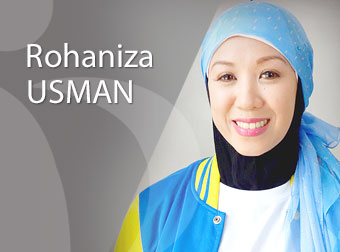 Rohaniza Usman was born as a Maranao Muslim princess in the Mindanao province of the Philippines. However, Rohaniza viewed herself as belonging to two cultures and faiths – her father’s side being Muslim, her mother’s Catholic. She grew up in Riyad, Saudi Arabia, where she was a witness to the terror brought by the first Gulf War in 1991. Through this experience, she committed herself to advocate for peace in Mindanao.

Until recently, Rohaniza worked as the Philippine Country Director and Coordinator for the Asia America Initiative. In this role, she promoted peace and development through education, inter-generational engagement and economic development in Mindanao. She was also the Associate Editor of Starfish Magazine, the first Filipino youth empowerment magazine.

Currently, Rohaniza is pursuing the establishment of a Children’s Peace Centre that will specialise in peace education for younger generations of Muslims and non-Muslims in an effort to develop a sustainable culture of peace for generations to come.

She is a charter member of Peace Talks, a network of peace advocates discussing issues and actions for Mindanao. She is also an alumni member of Ayala Young Leaders Alliance and a founding member of Active Catalysts of Tomorrow. At Outreach of Young Moro Professionals Network, which she chairs, young Muslim professionals advocate for peaceful means to improve the socio-economic well-being of the Bangsamoro people.

In 2007, she was recognised as an Ambassador for Peace by the Universal Peace Federation. She has also been awarded the Leadership by Example prize from the Rotary Club of Manila and in 2010 received a Princeton Global Network Award as one of the World’s Most Accomplished Individuals.