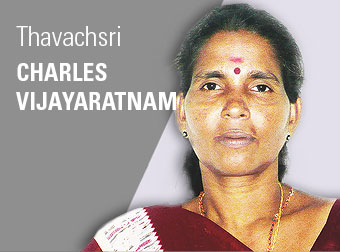 Based in Kilinochchi district, Thavachsri Charles Vijayaratnam has promoted the improvement of the lives of marginalised peoples in rural communities in Sri Lanka.

While growing up in remote Sri Lanka, her family suffered from extreme poverty and endured several famines. In her early twenties, she was exposed to the devastation and pain brought by the civil war in Sri Lanka’s north. Following the conflict, she sought to advocate for those who were voiceless in her community and were affected by hardships.

Thavachsri also works extensively for the advancement of women’s rights and livelihoods by supporting women-headed households to access loans and skills development training. She has held the position of Secretary of the community-level Women’s Rural Development Society, she has been the President of a women’s group, and helped create the Kilinochchi District Women’s Development Federation, which provides psychosocial support and social integration programmes for service users.

By supporting women’s recovery – and integrating vulnerable and marginalised groups into society – Thavachsri paves the way for a peaceful and empowered community.