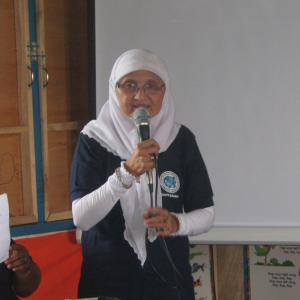 At the age of 13, Hadja Giobay Diocolano already realised the importance of fighting for what she believed in. She has been a pivotal volunteer, medical first-aider and empowered spokesperson for peace in her community.

Back in the 1970s, her family were well-known local leaders in peace and development advocacy, and her formative years were divided between these activities and going to school – although her education was often disrupted during periods of unrest. Her eventual decision to leave school was born less out of economic reasons and more out of a strong resolve to help her community.

Hadja Giobay became part of the revolutionary group behind the women’s committee of the Moro National Liberation Front (MNLF), and was shaped by her early experiences of conflict, spending much of her time helping medical teams, nursing gunshot wounds and counseling survivors. She would later oversee the operations of the biggest MNLF-run medical clinic at Marguez – a riverside, interior village, southeast of Cotabato City – and became a State Chairperson for the Women’s Committee of MNLF, covering most of the Central and Western Mindanao.

With the signing of the 1996 Peace Agreement between the government and the MNLF, she now promotes a culture of peace among communities affected by conflict, especially targeting youth and women. ‘Kadtabanga’ means helping one another. This is Hadja Giobay’s motto, and the name of her foundation in the Philippines: the Kadtabanga Foundation for Peace and Development Advocates (KFPDAI). This organisation helps 30 conflict-affected and conflict-vulnerable communities in central Mindanao become Peace and Development Communities (PDCs) by supporting former combatants and their children to become peace and development advocates. KFPDAI has been playing a vital role in the pursuit of the Bangsamoro political entity’s right to self-determination, and she has established a name for herself as a woman who has been looking for pathways of peace in this region.

“Initially, the challenge for vulnerable areas is the lack of common voice among the people. They need this to ensure they are recognised as a vital partner for government and international agencies. The foundation generally aims to synchronise their voices into one common vision and promote more responsive partnerships for peace and development in Bangsamoro,” she says.

The foundation has been working on peace-building initiatives, such as the delivery of basic services to those in need, livelihood projects, capacity building, violence against women and children prevention advocacy and response, and women’s rights promotion. She encourages youths to build their capacity as co-champions in conflict prevention in PDCs. She is also an advocate for the economic empowerment of those affected by conflict, spearheading the implementation of Islamic Microfinancing through Shariah-based Microfinance throughout conflict affected areas in the Maguindanao Province. This supports 1,080 individuals from 11 cooperatives regardless of their socio-religious tribe. The success of KFPDAI has inspired many communities in the conflict affected regions of Mindanao, and her organisation was a recipient of the RAFI Triennial Awards in 2015. This award recognises individuals and institutions whose efforts bring about change and enhance the quality of life of various communities. KFPDAI was also a recipient of the Gawad Kalasag Award in 2016 for outstanding contribution in Disaster Risk Reduction Management and humanitarian assistance.

“My dreams and aspirations are gargantuan. It is my honour to win this N-Peace Award as a local woman leader. I hope to become an even more proactive women leader for welfare and development from the grassroots level in the future. We should encourage more women to become involved in non-violent mitigation. I would tell them to be optimistic, fair, respectful, patient and strong.” 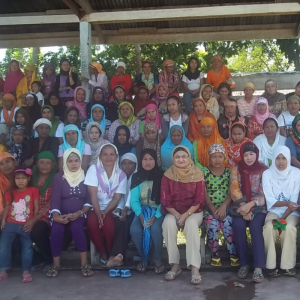 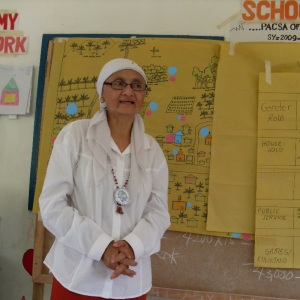 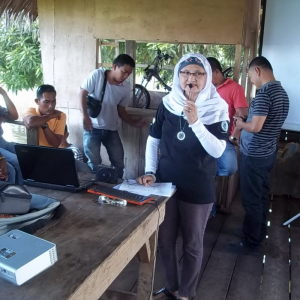