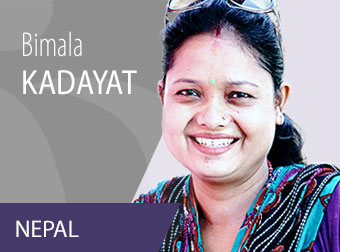 Born in a small village in the far-western region of Nepal, Bimala Kadayat lost her father at the age of eight, which resulted in her looking after herself and her four siblings from a young age. In order to afford an education as she grew up, Bimala spent her available time doing menial jobs to earn a wage.

When Bimala’s brothers became members of a local youth organisation in their village, Bimala was keen on joining them and participating in community activities. However, the youth club was not welcoming of women members. Regardless, Bimala persisted and joined, and she began organising awareness-raising initiatives and campaigns to educate fellow members on issues of bonded labour, violence against women, discrimination, and child marriage.

Bimala then established her own youth organisation with the main focus and objective of encouraging young people in the community to be more responsible for the social issues taking place in their region. Bimala’s organisation began to grow in size and developed partnerships with larger youth networks, and now it is a fully self-sustained organisation with various community development and peacebuilding projects.

Through her experience working with various developmental projects in the region, Bimala took the role of becoming a youth mobiliser in her village. Her growing interest to work for people affected by conflict, especially youth, led her to travel to remote districts of Bajura, Accham, Jumla and Rolpa to give experiential training for harmony between the politically divided youth. Through her work, Bimala has been able to contribute to the social reintegration and reconciliation of children and youth who have been involved in armed conflicts.