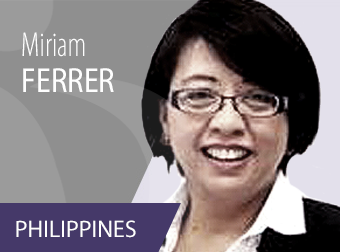 Miriam is a Political Science Professor at the University of the Philippines (UP), where she has also served as the Director of the UP Third World Studies Centre, and Convener of the Programme on Peace, Democratisation, and Human Rights under the UP Center for Integrative and Development Studies.

Miriam co-founded the Philippine Campaign to Ban Landmines in 1995 and co-chaired the Non-States Actors Working Group in the International Campaign to Ban Landmines which won the Nobel Peace Prize in 1997. The PCBL successfully lobbied the Philippines government to sign the International Treaty on the Prohibition of the Use, Production, Stockpile, and Transfer of Anti-Personnel Mines. In 2005, Miriam was one of 27 Filipinos among the 1000 women collectively nominated to receive the Nobel Peace Prize.

Additionally, Miriam co-founded the Sulong Comprehensive Agreement on Respect for Human Rights and International Humanitarian Law (Sulong CARHRIHL) which promotes compliance of the Philippine Government and the Communist Party of the Philippines-National Democratic Front to the signed agreement. The network was instrumental in facilitating the drafting of the National Action Plan on the United Nations Security Council Resolution 1325 on Women, Peace, and Security that was subsequently adopted by the Philippine Government in 2010.

In 2018, Miriam became a member of the United Nations Standby Mediation Team, a selected group of Senior Mediation Advisers who can be deployed to provide mediation support and expertise worldwide.