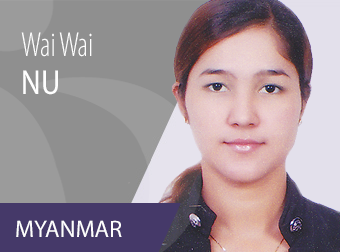 Wai Wai Nu is a former political prisoner, peacebuilder and human rights advocate from Myanmar belonging to the Rohingya community. At the age of 16, she was given a place at the University of East Yangon to study Law. However, at the age of 18 Wai Wai was arrested and sentenced to 17 years in prison, together with her mother, sister, and brother, for supporting and promoting the idea of a democratic Myanmar. Wai Wai’s father had been a member of Parliament who had been sentenced to 47 years in solitary confinement. In 2012, after seven years in prison, Wai Wai and her family were released under a presidential amnesty for political prisoners.

Wai Wai formed the Women’s Peace Network in 2012 after her release and used the organisation as a platform to promote peace and mutual understanding between Myanmar’s different ethnicities, with a specific focus on advocating marginalised women’s rights. In this role, she has conducted women’s empowerment training, offered legal education seminars, and organised human rights and peacebuilding activities.

Since 2012, Wai Wai has founded and directed the Yangon Youth Leadership Centre (2015) and has taken the position of Campaign Manager of the My Friend Campaign (2015). As well as this, she has completed her law degree and has co-founded and become the legal consultant for Justice for Women (2013). Wai Wai has also taken part in the inaugural class of a training program for young leaders at the George W. Bush Centre (2015), and in the same year was named one of the Top 100 Global Thinkers by Foreign Policy Magazine. In 2016, she was named as one of 100 inspiring women by Salt Magazine, and in 2017, she was named one of the Next Generation Leaders by TIME Magazine.

Wai Wai is internationally recognised as an empowering human rights activist and in 2017 she spoke at the Oslo Freedom Forum. In 2018, she was awarded the Hillary Clinton Award from Georgetown University and has delivered a lecture at the Christobel Kotelawela Weerasinghe Lecture as part of the University of Michigan’s upcoming Diversity, Equity, and Inclusion Summit. Wai Wai is also an advocate for the United Nations on the human rights situation in Myanmar. In 2018, she graduated with a Master of Laws from the University of Berkeley, School of Law and selected as one of the Young Global Leader 2018 by the World Economic Forum, where she spoke.