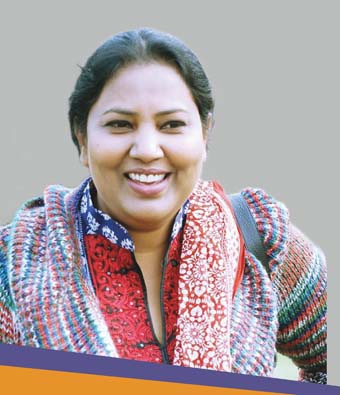 Rubina Feroze Bhatti was brought up in a mainly Muslim country, Pakistan, whilst being raised as a Christian. From a young age, she was exposed to the realities of violence against women, such as through “honour killings”, and sought to take action against gender-based discrimination in Pakistan.

Whilst studying for her Master’s course in Multan, a relative of Rubina’s was arrested and given the death sentence. Rubina campaigned against his imprisonment; she wrote articles and organised protests, and shortly after this, her relative was released.

Her attention then turned to the ill-treatment of women in Pakistan; with numerous women being victims of acid attacks and tragically being killed through “honour killings”, Rubina launched a media campaign to highlight what was taking place in the communities. She became the Project Leader of the Women’s Leadership Dialogue for Change, and after that the Executive Director of Taangh Wasaib Organisation (TWO), where she has worked for over a year and continues to do so today.

TWO is a rights-based organisation that strives for equality by providing programmes and projects which directly tackle stigmatised issues like violence against women, religious intolerance, and discriminatory laws. In this role, Rubina encourages women to report violence and then supports them through the process, providing them with counselling and legal aid.

Rubina has also established educational and healthcare institutions for children in Pakistan’s carpet-weaving industry, she has introduced human rights education programming in over 200 schools in Pakistan and has written two scripts for films on human rights and peace issues.

Rubina has been nominated for the Nobel Peace Prize, Woman of Courage Award, and has also earned the World Vision International Peacemaking Award.