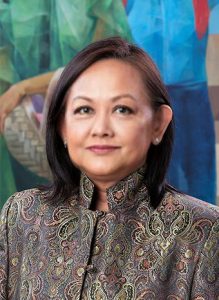 A noted human rights advocate, Amina Rasul-Bernardo has used a melange of private sector engagement for sustainable peace development, academic advocacy on the intersections of gender, religion and peace, journalism, and community engagement with conflict affected communities to ensure inclusion of women on a myriad of levels. She is the Co-Founder of the Philippine Center for Islam and Democracy (PCID), an institution which aims to empower Bangsamoro for peace and development. Amina has worked tirelessly to organize the Noorus Salam (Light of Peace), a national network of Muslim women religious and civil society leaders. She spearheaded the National Ulama Conference of the Philippines – a national network of Muslim religious leaders.

In addition to these efforts, she developed an Islamic peace manual which has been used in the Philippines and the region. The manual has further been developed and implemented by the Philippine Centre for Islam and Democracy as well as the Philippines Commission on Human Rights for a human rights manual for Muslim communities. Her work with PCID has resulted in research on the drivers of extremism in Philippines and South East Asia, and further strives to empower conflict-affected communities to prevent violent extremism. Amina continues to be  a champion of Women, Peace and Security in the Philippines and to advocate for further visibility of women in conflict at regional and international levels through her published articles and columns.